SPACs in Stock Market: How to Get Quick Access to Stock Exchange 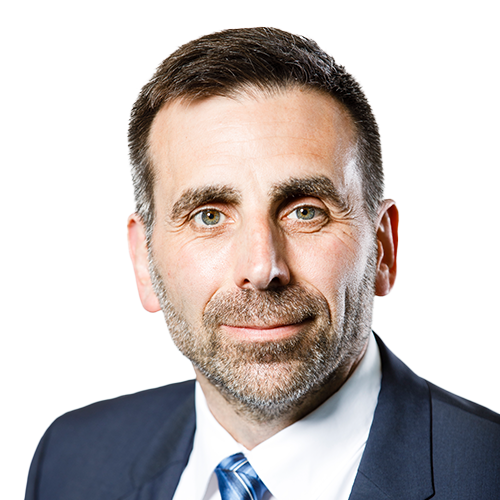 This article is an introduction to the concept of SPACs and a SPAC in stock market and their potential suitability for new entrants in the automotive industry. A lot of important questions are addressed. What are SPACs? And how do you get faster access to the stock market working with them? 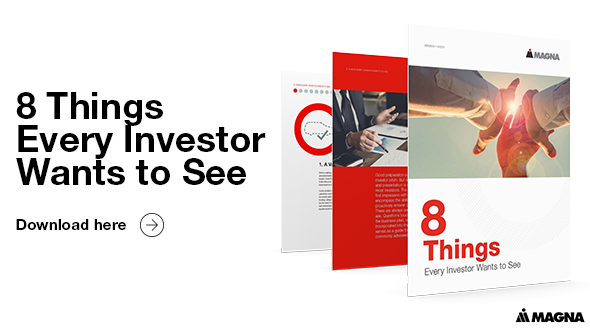 Financing an automotive vision is a challenge, particularly for new entrants. There are many reasons that raising money is a challenge:

Fortunately, there are various ways to secure capital. Let's have a look at two of them before having a closer look into SPACs or special purpose acquisition companies.

One method is equity crowdfunding, which is seldom used in the context of funding a new entrant and presents an overall suboptimal form of financing for such large capital requirements as bringing to market a new vehicle.

Loans are another option; however, they are not a practical option given the uncertainty of outcomes of a new entrant and tend not to align with the negative cash flow profile of a new entrant in a pre-market status.

Another potential funding source is merging with or being acquired by a Special Purpose Acquisition Company (in short: SPAC) to access public market capital. Generally, working with a SPAC requires the automotive vision to be sufficiently advanced.

SPACs have existed for quite some time and offer an accelerated way to access the stock market. In certain ways, SPACs enable businesses to bypass the traditional initial public offering (IPO) route historically taken by established enterprises.

Among new entrants, who may be in the early stages of their business, SPACs have recently become a very popular option for accessing public market capital. 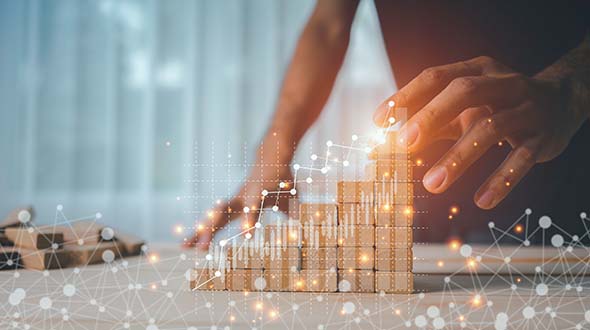 WHAT ARE SPECIAL PURPOSE ACQUISITION COMPANIES?

A SPAC is essentially a shortcut for raising capital. They are publicly listed companies created solely for acquiring existing non-listed companies. But how can a SPAC help you with a fast access to the stock market?

This is done through raising money with an Initial Public Offering (IPO). SPACs are also known as Blank Check Companies (BCC), a name that refers to the fact that SPAC IPO investors entrust their funds with a SPAC without knowing in advance the precise business that the SPAC will acquire.

In this regard, the SPAC management has a relatively blank check to find an acquisition. This reference somewhat exaggerates reality, however, as all acquisitions by a SPAC must be approved by the shareholders of the SPAC, and SPAC shareholders generally retain a right to redeem their shares if they do not want to continue to invest in the company following an acquisition or merger.

Nevertheless, SPACs clearly facilitate and accelerate access to the stock market and public market capital. The process of converting a private company into a public company and making shares available for public purchase is sped up substantially.

This allows new companies to enter the stock market notably faster and easier.

The graphics below show the increasingly growing number and proceeds of SPAC IPOs in comparison with non-SPAC IPOs from
2003 to 2021. 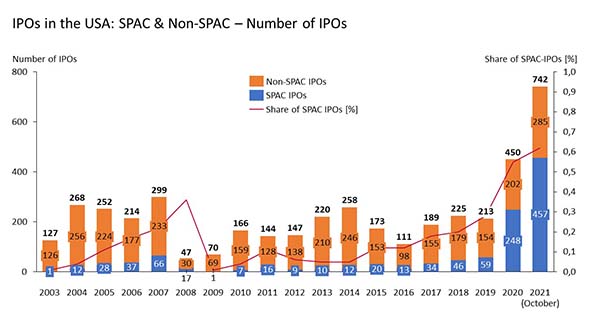 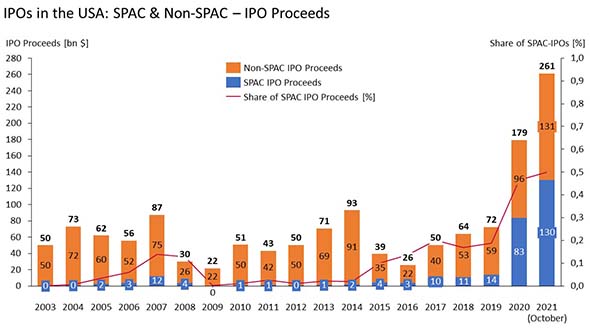 How SPACs in Stock Market Work
When boiled down, this is how the process works. First, the SPAC is listed as a publicly traded company on a stock exchange with the intention of merging with or buying another business.

Investors can then purchase shares in the SPAC through a traditional IPO or in the secondary market once the SPAC shares begin trading publicly. Through the IPO, the SPAC accumulates capital.

Following its IPO, the SPAC seeks suitable unlisted companies – in this example, a new entrant – for a merger or acquisition. Once the SPAC has identified a suitable acquisition or merger candidate, negotiated the terms of a transaction with the private business and filed the required information with the securities regulators, SPAC shareholders vote whether to approve the transaction. If approved, the SPAC acquisition or merger proceeds as planned.

Once the acquisition or merger is completed, the SPAC public shareholders and the new entrant shareholders would hold the shares of the same entity and only a single group of shares would be publicly traded.

This “de-SPACing” process allows the new entrant to access the SPAC’s funds to the extent that this capital is not redeemed by SPAC shareholders at the time of the transaction, thus indirectly raising public capital.

On average, the whole process from a SPAC IPO to the closing of a merger or transaction takes around two years. Once the transaction with the new entrant is consummated, the shareholders of the new entrant may be required to hold their shares for a predefined period.

THE BENEFITS OF SPACS IN STOCK MARKET

One of the biggest benefits of SPACs is the quick access to the stock market. A new entrant can enter the stock market and become a publicly traded company more easily, especially compared to the traditional IPO process.

Another positive factor is simply that SPACs can provide a new entrant with quicker access to funds as these funds have already been raised. Additionally, given that SPACs have a finite life and are actively looking for a suitable acquisition target, a new entrant with an adequately advanced vehicle or concept may have meaningful interest from multiple potential partners.

It is essential that the new entrant prepares well-thought-out vehicle plans, a credible business plan and the management pedigree to deliver on the proposed vision. A popular success case in this instance is Fisker Automotive.

Fisker enjoyed two meaningful advantages to support the planned merger with a SPAC.

First, Henrik Fisker was the Chairman, CEO and biggest investor in Fisker Automotive and Henrik enjoyed an enviable reputation as one of the world’s great automotive designers.

The second key advantage was Fisker’s affiliation with Magna. This cooperation was well communicated and provided further validation and support to Fisker’s vision. The merger with the SPAC was successful for Fisker Automotive and the price of the shares traded higher on the market.

SPACS IN STOCK MARKET: POTENTIAL RISKS TO AVOID AND LOOK OUT FOR

Of course, as with any financial dealings, there are risks involved. A crucial topic to manage in the operation of a SPAC is its shareholders and ensuring that following the merger, sufficient funds remain to carry out the new entrant’s vision.

An important nuance when dealing with a SPAC is that shareholders can vote to approve a merger or acquisition by the SPAC but at the same time withdraw their capital in a process called “redemption.”

The end result is an approved transaction but an insufficient capital base. There are a variety of reasons why this can occur and a number of mechanisms to deal with this risk, each of which are outside of the scope of this article, but it is nevertheless an issue that must be considered.

Additionally, one must always consider that public companies have to meet different expectations than private companies. When merging with a SPAC for a quick access to the stock market, the new entrant needs the right infrastructure to function as a public company. There are more responsibilities to be managed and as such an experienced management team should already be in place.

More details about risks that come with SPAC transactions are listed in the articles of Middle Market Growth, “Beware of These Five SPAC Risks”, and Forbes, “The Risk and Returns for the Increasingly Popular SPAC Trade”.

The factors listed above as well as the dilutive impact of SPAC warrants (issued as part of the IPO process), founder shares and other elements are very important when it comes to the decision on which kind of financing a new entrant wants to use. Taking all of these factors into account could be the difference between making or breaking a new entrant’s vision.

Learn more about "8 Things Every Investor Wants to See"

How to Pitch to Investors with a Good Story

By the time a new entrant will start their  search for investors, they will most likely have...
Read
Investors / 6 min

How to Find Angel Investors to Support Your Automotive Startup

The question of how to finance an automotive startup as large as developing a vehicle is one of the...
Read
Manufacturing Solutions / 5 min

5 + 1 Reasons Why Automotive Startups Fail in the First Year

The transition towards electric mobility has opened up the automotive industry for new and...
Read